Mr. Arul Chandran was called to the  Bar of England & Wales in 1959 as a barrister-at-law of the Middle Temple, London, and later to the Singapore Bar in 1961 and was also called to the Malaysian Bar and practiced there on occasion from 1964 to 1978.  He started off his career holding several appointments in the legal service in the then Attorney-General’s Chambers and elsewhere in Singapore and was a partner at Rodyk & Davidson and later Karthigesu & Arul and lastly the sole-proprietor of C. Arul & Partners before it merged with Arul Chew & Partners.

He is a fellow of the Chartered Institute of Arbitrators (FCIArb) and a fellow and former Council member of the Singapore Institute of Arbitrators (FCIArb). He has frequently sat as arbitrator appointed by Singapore International Arbitration Centre (SIAC) and panels under several institutional rules and has been involved with the Singapore Chamber of Maritime Arbitration (SCMA), the Indonesian Arbitration Centre BANI as well as with HKIAC in Hong Kong, in India and elsewhere and has been appointed sole arbitrator, member of a panel or Chairman of a panel of arbitrators in both institutional and ad hoc arbitrations. He has been chairing/appeared as a guest speaker over the years at many legal/arbitral forums, talks and seminars both locally and abroad.

He is also a past Deputy Secretary-General (Asia Pacific) of the International Bar Association (IBA) for many years, past member of the Council of the Section on Business Law of the IBA, past Council member of The Law Society of Singapore and a member of many other international and regional arbitral and professional bodies. 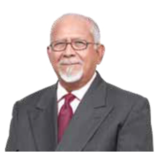